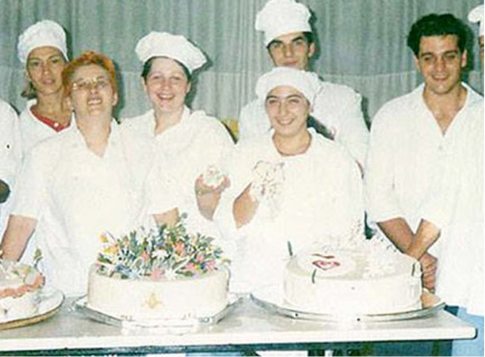 The School’s story begins with the acute need for training and specialization of professional Chefs and Pastry Chefs. After studying in Paris, close to legends of global gastronomy, Chef Virginia Anastasiadou and Sam Levis set up the first private school of Cooking, Pastry and Bakery in Greece.
A wonderful journey had just begun.

In response to the ever-increasing demand for quality education, we created the first class for people who wished to engage professionally with the art of Cooking and Pastry – Bakery. La Chef Levi soon became a benchmark for gastronomy in the Greek professional world.

From the very first day, this undertaking was embraced not only by people belonging to the industry, but also by gastronomy enthusiasts in Greece and abroad.
The first student of the School was Akis Vasakis, current owner of the factory producing the famous Akanés and two confectioneries in Serres! 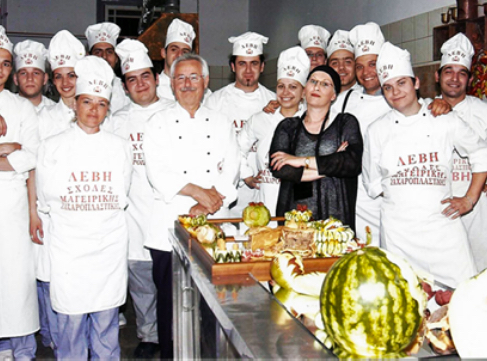 The number of students is tripled up and the School moves to new facilities downtown. After the School’s first five years of operation, it had still remained the only one in the industry, long before others.

La Chef Levi graduates have already begun to occupy high positions in the labor market, always with respect to the principles of global gastronomy. Even today, the school’s facilities still remain in the most central part of the city, next to Aristotelous Square. Here, even three decades later, the dreams of all those who wish to become skilled professionals in the field of gastronomy continue to be accommodated.

1st IN GREECE, 6th IN EUROPE

La Chef Levi wins the title of the 1st best school in Greece and at the same time that of the 6th best school in Europe, titles that are awarded for the first time to any school. In Brussels, after months of preparation and with great effort, the students of the School present an excellent menu, advertising their level of education and thus making their Chefs and the Greek gastronomy world proud.
Want to see more distinctions? Click here! 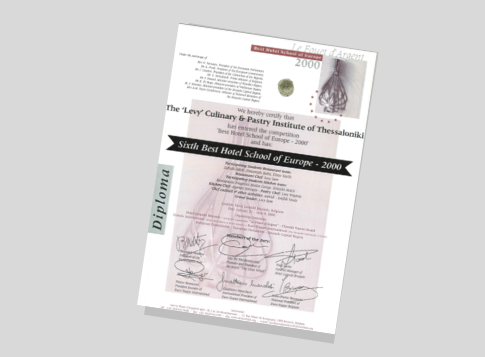 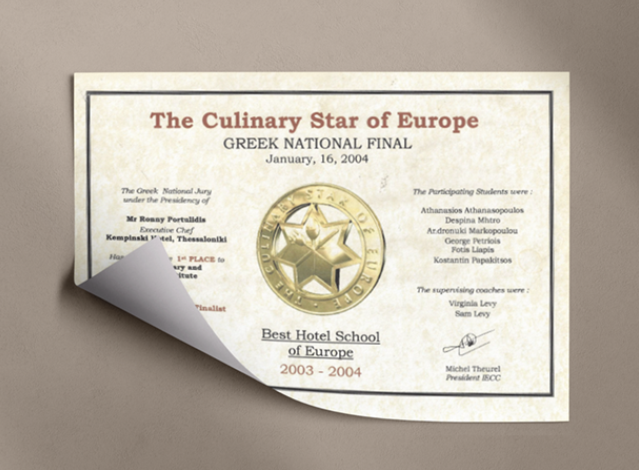 No1 IN GREECE, AGAIN!

In a breathtaking final, the Culinary School stands out yet another time as the best school in Greece. Greek and foreign Chefs recognize the high gastronomic level of Chefs and students of La Chef Levi. The inspiration for the menu with unique taste and appearance was drawn from a children’s game! The rest is history!
Yet again!
At La Chef Levi creativity strikes when you least expect it!

See what Stavros Kanakidis, a member of that student group and at present Chef in Hyatt, London with a brilliant career in the UK, said

A significant milestone in the history of the school and of Greek gastronomy as a whole, La Chef Levi becomes the first Greek school to operate abroad.

In the center of Algiers, after 23 years of operation in Greece, students from all over the world learn the secrets of Cooking, Pastry and Bakery directly from world famous Chefs coming from all corners of the globe. Greek students visit the school for free courses and workshops while many find work in luxury six-star hotels where they work alongside French Chefs, thanks to the School’s career services.

The high demand for Chef Anastasiadou’s gastronomy book motivates the school to translate it into French with the first printing counting 10,000 copies. La Chef Levi is now well-known around the world, offering new opportunities for all its current students and graduates.

The first Greek global gastronomy group is a fact. 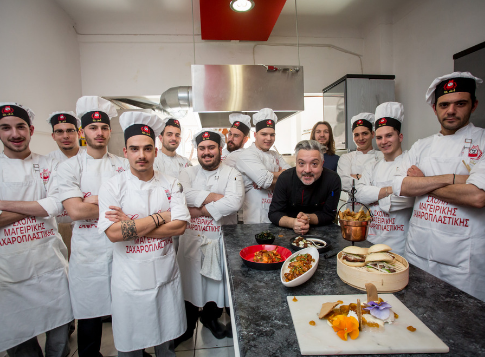 HISTORY SPEAKS FOR ITSELF

After having completed 30 years of operation, La Chef Levi continues an upward trend with more and more students, while at the same time remaining loyal to exclusive expertise by offering only two specializations from its very first day of operation.

The students of the school carry out their internships in luxury hotels in Greece, Cyprus and abroad. Our graduates work in the largest hotel chains in the world, in confectioneries and Michelin-starred restaurants, while many others run their own successful businesses.

Find out more or adjust your settings.

This website uses cookies so that we can provide you with the best user experience possible. Cookie information is stored in your browser and performs functions such as recognising you when you return to our website and helping our team to understand which sections of the website you find most interesting and useful.

Strictly Necessary Cookie should be enabled at all times so that we can save your preferences for cookie settings.

If you disable this cookie, we will not be able to save your preferences. This means that every time you visit this website you will need to enable or disable cookies again.

Ad Cookies are used to provide content that best suits the visitor’s preferences. They are typically used for targeted advertising, promotion of offers and for measuring effectiveness. The services we use are Google Adwords and Facebook.

Please enable Strictly Necessary Cookies first so that we can save your preferences!